Oh boy... You got me working for hours to restore an environment where I could run my games written starting the late 90s and into the new millennium. Still... it was worth every single bit!!! Had a total blast parsing through my oh-so-many programs from those days.

Pilot game and story:
In the late 90s, I was almost 10 years old. My family was not very rich and the market in my country provided only certain PC's at certain prices so we only had two computers. One was a Pentium I for my older brother who needed it in high-school, and the other was an IBM 088 with simulated CPU and a Hard Drive of only 20 MB's and a black-and-white monitor. It ran only MS-DOS 6.0 which took 5 MB's of space, leaving me with a whooping 15 MB's to work on. I actually felt important because I needed to delete some of my written code because I had no more space on the HDD - now that's coding!!! - never happened to me again since then....

The only game I was able to program on that computer was a guessing game. Windows and shadows of course, but basically you had to guess a random number from 1 to 10. If you guessed it, the computer would say 'Congratulations!' and that's about it :D

I could not find that game to attach screenshots unfortunately. Has been lost somewhere in my childhood. I also programmed a "windows paint" for my black-and-white monitor, but that can't really pass for a game, although, is was fun using two colors and hatches to draw a picture. Again, no screenshots :( but these would be the road openers :D

Game 1 and lesson:
My IMB 088 was playing Price of Persia 1 (The Original one) and it was playing it quite well, even if only on a black-and-white monitor, the colors were simulated and it looked soooooo cooooool for it's time. Based on that game, I wanted to create a game where one could wonder around with a character, but in modern world times :). Reminds me of Day9's "puppet man". And, when my brother went to college I got his Pentium I :D - this was around 2000 and I was almost 12. So, I created a conceptual game, just to move around on the screen. Here are some screenshots (God it took hours to get this environment to work again :))) )

For some reason that I cannot understand today, I was happy with these results so I put up new color and a background and different movement techniques. I wanted to keep the character in the middle while moving the background. And so... "ROBO BOY!!!!!" was born. Look at some screenshots with robo-boy moving in front of that magnificent architecture:

Game 2 and lesson:
This games was created after I had discovered the power of space geometry. I really wanted to experiment with doing a 3D game of my own, even if only with limited graphics. And so, I tried to do an FPS. Here goes.... 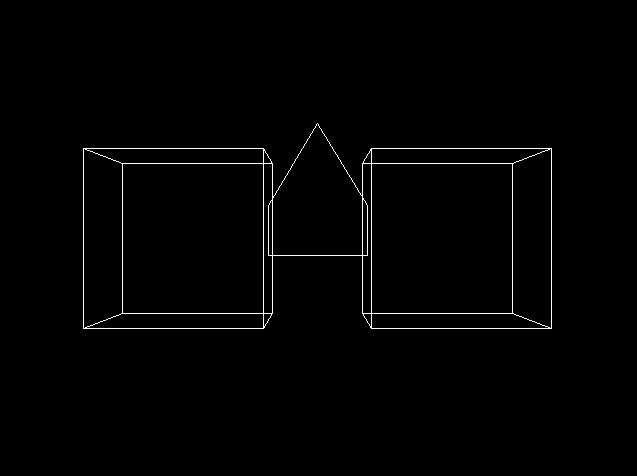 Conceptually, moving around in a 3D environment that I had created was so much fun, even if all I could do is shoot two cubes with no gun, that I spent hours admiring my work. And I was also baffled at the amazing power of maths! 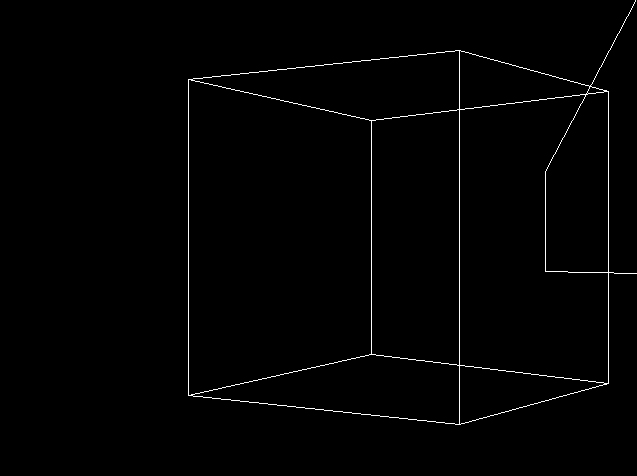 Controls were the standard ones (W,A,S,D for movement, mouse move to look around and mouse click to shoot). The real challenge was hiding the mouse and not stop rotating when the "invisible" mouse reached the end of the screen. Those who have meddled in low level programming of mouse effect know what I'm talking about ;)

Lesson: 3D DOES MATTER! As much as I did not want to believe it then (I was having tons of fun with 2D games, running around in a 3D environment is fun by definition, even if there's nothing to do but run around. Lesson 1 was starting to buckle...

Game 3 and lesson:
2 yeas have passed since the inauguration of me programming small games that no one would play. But no more! Introducing.... Pool Game!!!!!! Without any acceleration or physics of any kind. But maaaan it was fun to play :D

Sorry for the language, I was not versed in English back then so I used my native language: 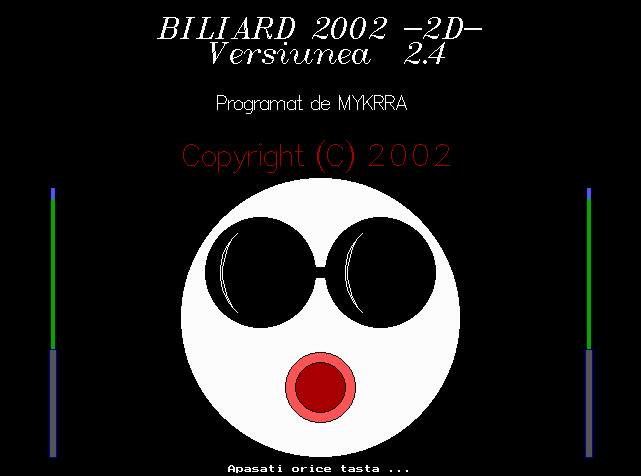 I'm not gonna make any sexual-related joke connected to how this intro screen looked. I wasn't even 14 ok!!??? This looked extremely cool in my young eyes... 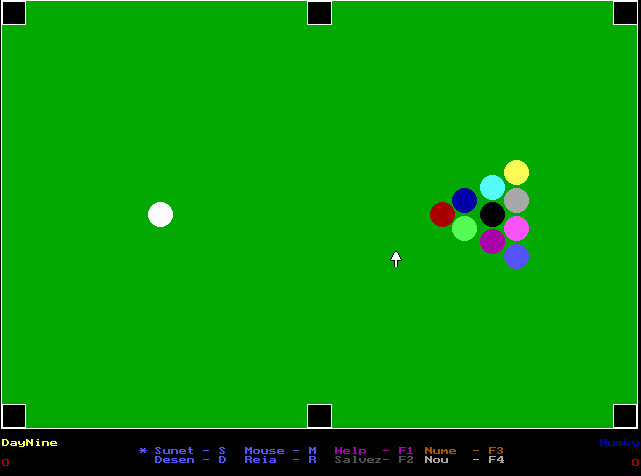 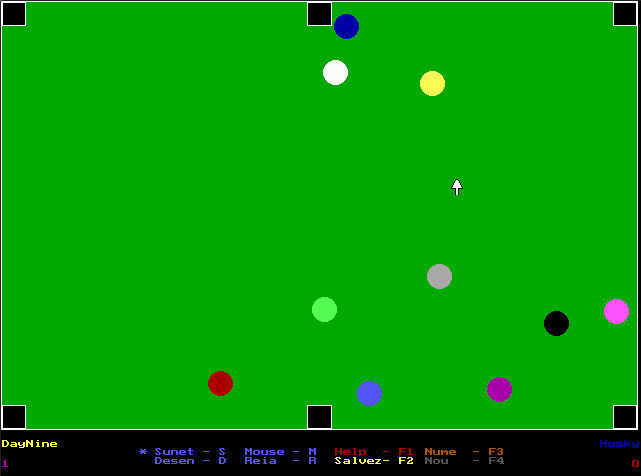 Did you see it? Here it is larger in case you missed it: 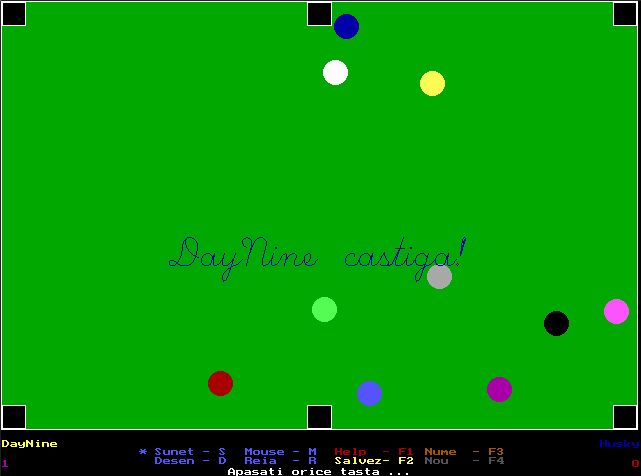 DayNine cheated and won! What??? One more game he beats Husky at :p

Lesson: Programming cheats into your game is fun like hell !!!! I know now that cheats are programmed in order to speed up the testing process but my God was it fun to put some cheats in and see if people discovered them. No one ever did until I showed them (still, had I had internet in those days, somebody would have cracked it :D). Here's another sweet cheat I loved: 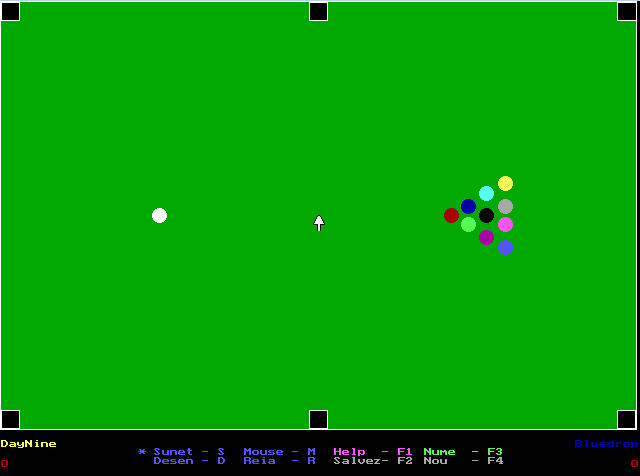 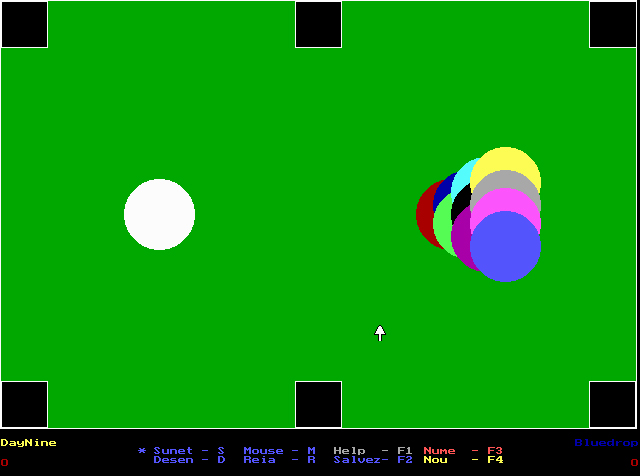 Of course, one year later, I started rebuilding the game, including physics, acceleration, custom mouse cursor, and power of shot indicator (the above version had a shot as powerful as the distance between the white ball and the mouse was. Not really sporting I might add... I never finished the new version but it was really cool: 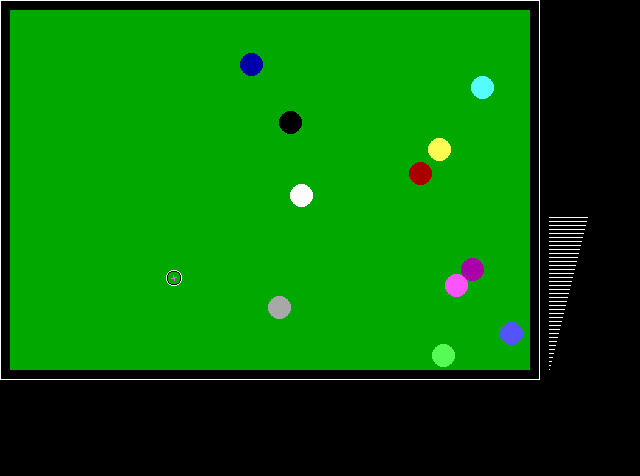 The list of "other games" which I've done until today will not be published here - I'm scared they might delete my post, we still have 10 years to cover and some games were really good! I encourage you all to try and program a game. A very small one, with simple rules. There is very little compared to the joy of playing a game you worked on...